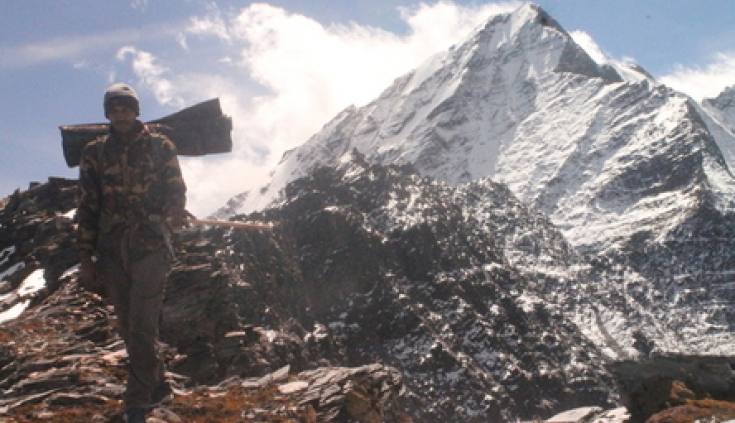 Sisne Round trek is recently discovered during the CORON lockdown periods (August- September, 2020)  for the untouched geographical linkage and promotion of tourism, by a renowned guide and mountain expert cum. a local inhabitant of the region, Man Bahadure Khatri, who defines this trek as a virgin one for destinations of the recent and in the future periods with heartily panoramic views of 28 mountains of Kanjirowa Range and others mountains like Putha, Churen, Gurja, Ghustung, Dhaulagiri-6 of Dhaulagiri Range, Gupta Daha, Shyarpu Lake, Rakta Kunda and  Nau Daha. Sisne Round trek offers you special & important places (Batuli patan, Ghagare Balcony & Deuti pass). It has also more connected  trails from these mainly Rukum - Juphal -Dolpo - Shey- Phoksundo Lake and trails of West Dhaulagiri trek in near future so that numerous visitors can be welcomed in the fascinating and virgin trails of the Sisne Round. Additionally, the mid- point between Jaljala  and Gupta Daha will lead us to Rukumkot; a village that carries religious & cultural value; also  nick- named as a place with 52 pond and 53 lakes.

Sisne Himal is inland peak of Rukum district and the western highest peak of the west Dhaulagiri massif, at an elevation of 5911 m. It’s also known by another popular name as Murkatta. The reason behind this name is connected with a legendary saying that if its height goes on increasing day by day then one day it would prick & destroy the heaven. Hence, Sisne Himal was chopped down by Holy God into three parts:  The head part which was separated now is called as Main Dhaulagiri, the body part is called as West Dhaulagiri and, the remaining part is called as the legs of Sisne Himal. During the civil war in Nepal, Sisne was taken as the base and also many literatures have written songs and poems which have indeed increased the importance of trek, climbing and expedition.

Although Sisne mountain is small in appearance, it is located in Dhaulagiri Himalayan range towards far south and is also visible from the Terai belt of Nepal. So, it carries enormous value too. Around Sisne region, there lies other spectacular tourist attraction places like the Batuli Patan, Chitri Patan, Hiunchuli Patan, Lalpatan, Kamal Lake of Rukum with beautiful Lotus flowers (that also symbolize positive part in the contrary of negative or bad thoughts), Deurali Cave, the Gupta Daha, Shyarpu Lake. Among them, Gupta Daha is the main attraction point because, we can see the reflection of Sisne mountain inside Gupta Daha, which takes the trek into another level of heavenly feeling. The Shyarpu Lake also provides best opportunity to taste different varieties of fishes. When we talk about culture, Rukum Pokhara hits the top because of its old diversity, integral ethnicity settlements and servings of hot springs water bath. We can also get chance to see and observe old villages (Gotamkot, Banfikot, Rukumkot, Musikot, Aathbiskot) settlements, shepherds meeting while resting in the hut, Yarsagumba harvesting zones, wild honey hunting, biodiversity of Dhorpatan Hunting Reserve (the only hunting reserve of Nepal) being touched with Sisne territory, diving into historic civilian war: 1996 to 2006 A.D, we find the tunnel trenches in the form of debris till today.  The history during the civilian war will tell us about Sisne – Jaljala combined campaign that had brought the concept of economic activity; animal husbandry.

It is advisable to take assistance of a technical guide for this trek.

[ The exclusive sacred legendary tale as studied and collected by Man Bahadur Khatri about the Sisne Himal and the ponds : "Lord Shiva came to the sacred, Sworgadwari from the Heaven and sets his own habitat here only. He enters into meditation at sacred, Sworgadwari, where he is distracted frequently by bad spirits or thoughts. The eagle (positive spirit) comes to offer him snake (The eagle's favorite food) but, the Lord Shiva didn't accept the offering; the eagle with its rage rolls snake on the neck of Lord Shiva and goes away from there. Eagle gets answer in the dream that it should not was to show such anger towards the Lord so visits again carrying a big or large Snake to offer him again. This time also the lord replied patiently that he was having its yesterday's offering so again, if you want to offer me then you have to do as I say. Divide or cut down the large snake into two pieces and throw head to the North East & the remaining parts of the snake's body towards North West of the Sworgadwari, where very soon grown out MARIZONA (hemp) everywhere in big size and smaller ones respectively on the north and west parts of the region where, Rukum is considered and renowned as the origin of best quality Maizoana out of the world. But, there is complain brought by the local inhabitants or creatures that they could plant no edible crops due to repeated growing hemps whole seasons, covering the whole terrain. The Lord replies, "all parts of the hemp is useful to living creatures of this world. The leaves are used as medicine in the treatment of  diarrhoea among Goats or livestock, Seeds (looks exactly like the eyes of the snake) can be processed to edible & massage oil and for preparing pickle, the Stem & roots is used as fire- wood for cooking food, the bark of the stem can be manufacture into clothes that you can wear". The violators turned calm after knowing usefulness of hemp and returned back from there. Second time also, the villagers complained again about black sticky liquid for which Lord Shiva replied again that the black sticky liquid (kaalo chop or attar) of the hemp is also useful and showed to all violators (bad spirits) by smoking; also distributed to the violators too where, the violators received instant unconsciousness. As the environment was established silent, Lord Shiva got enlightened with his meditation. Then, Lord Shiva along with his troops went to Pokhara Hotspring that situates on the bank of the Utter- Ganga river (Sano Bheri) for taking hot shower but, here too the violators arrived following the shortest route. Meanwhile, the Lord Shiva turned around and blocked enemies by scattering them and to prepare his own pilgrimers, which resulted to evolve Kamal Daha (Rukumkot) and Shyarpu Lake there only at his stepped footprint in a crossed position but, instantly, the enemies arrived at once to become a blockade for Lord Shiva by spreading & forming shape of rainbow all around Sisne Himal. After securing some female pilgrimers & his own wife, Goddess Parbati at Gupta Daha, the Lord Shiva fought with enemies continuously and developed an illusion that Sisne Himal was growing its height as if to prick heaven so, with his rage chopped down the head part of Sisne Himal which gave rise to Dhaulagiri- 1, again chopped Sisne Himal which gave rise to West Dhaulagiri and, the remaining part stood as foot of Sisne Himal. The Lord Shiva wipe- out his blooded hand to drop down blood which emerged into Rakta Kunda and on the North- East of Sisne Himal with his supernatural power, he created Naudaha (also called small Kailash Himal or 1st or ancient kailash Himal) in order to set himself calm through meditation. Then, Lord Shiva returned back to Gupta Daha to meet his hidden secured beloved queen (ardhangini) and some female pilgrims and received farewell from there too. The whole team left away Gupta Daha towards Sworgadwari Bhanjyang (Dwari Bhangyang), where the Lord Shiva meets his suddenly emerged mother in the form of Aama Himal, where he drinks water offered by his mother then takes a leave for Rup Patan to stay there holding cultivation lifestyle as a farmer. Finally, Lord Shiva along with his special ones disappears to the Heaven from Dwari pass." ]