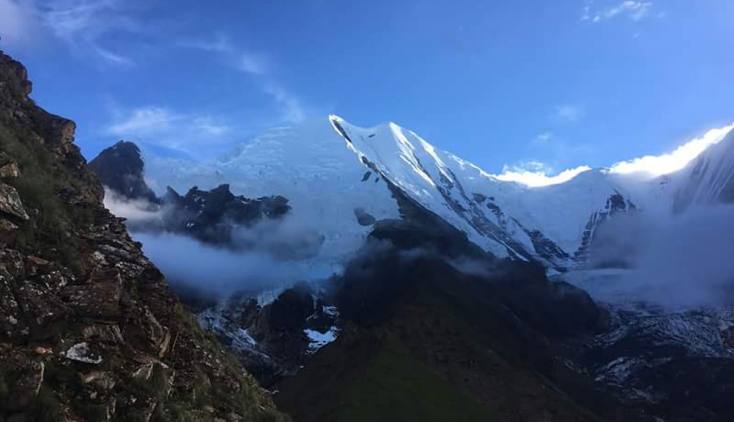 Inside Sheyphoksundo National Part at an elevation of 6612 m in the Dolpo region, a beautiful, famous and 2nd tallest mountain of the district locates. Putha, Dogari, Samjang and Sisne mountains are its neighbors, lies on the south. This mountain is known by two names; Gangchhenralwa Himal and Kanjirowa Himal.

Being a part of Kanjirowa Himalaya, it forms a separate Himalaya towards South China, Tibet so it holds its own identity and importance. Japanese were the first to attempt its expeditionand many othernational and foreign climbers too attempted the expedition without enough supporting proofs. In the current year by May month, Nepali explore team, “Kanjirowa Himal Explore and Study Expedition 2016” also attempted the expedition and successfully stepped on the 2nd Summit ridge of this himal which provided really informative and valuable data regarding its expedition. According to this Nepali Explore team of 2016, the south ridge is easy and safer as compared to other sections for its expedition. Dho- Tarap village is the last human settlement in this region.

This peak is growing rapidly in the market besides its few known facts. Nepal Mountaineering Association and District Level Government are contributing its technical support for this Himal. The expedition would bring about significant growth in the income of locals and Nepal Government.

The various parts of attraction are the self beautiful Kajirowa Himal standing right on the Sheyphoksundo Lake, the beautiful villages with different ethnics and their culture. We can also carry on the wonderful time in the Sheyphoksundo National Park within this expedition.

Note : Some time, we may have to wait more in Nepalgunj because of delayed time in flight with various reasons so, better could be to

charter from Nepalgung  or either Pokhara.